During the first term of my MArch stage 5, we were given three tasks to complete, each task building upon the themes and topics explored in the previous. The overarching theme of these tasks was the exploration of: An Objects’s Dynamism In Space-time. These tasks employed us to question; how we interact with these objects, what do our senses tell us about it, the materiality of the object, it’s structure and from, the function of the object, the relation between the object and it’s surroundings, how it may change. Furthermore, how do these characteristics interrelate and how can we articulate all these characteristics; specifically, hierarchically, combinatorially , or layered.

Through the analysis, of first an inorganic object (in our case a computer’s motherboard), we were tasked to produce an artefact which could represent these characteristics, both representing the objects 3-dimensional form, but also it’s function through time. We were employed to iterate on our artefact from 2-dimensional representation to 3-dimensional representation, from digital to traditional fabrication.  The second task was a retelling of the first, however, the object was replaced with an organic creature (in our case Coral Colonies). 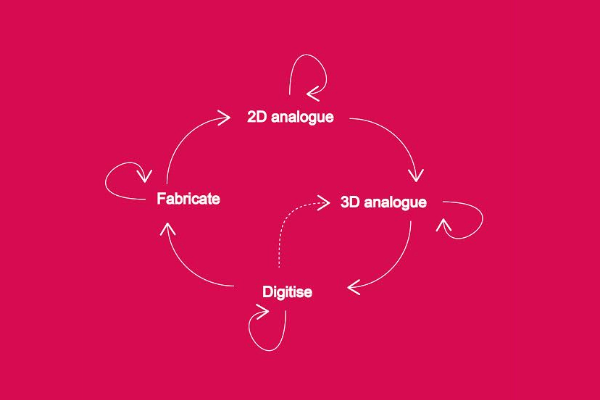 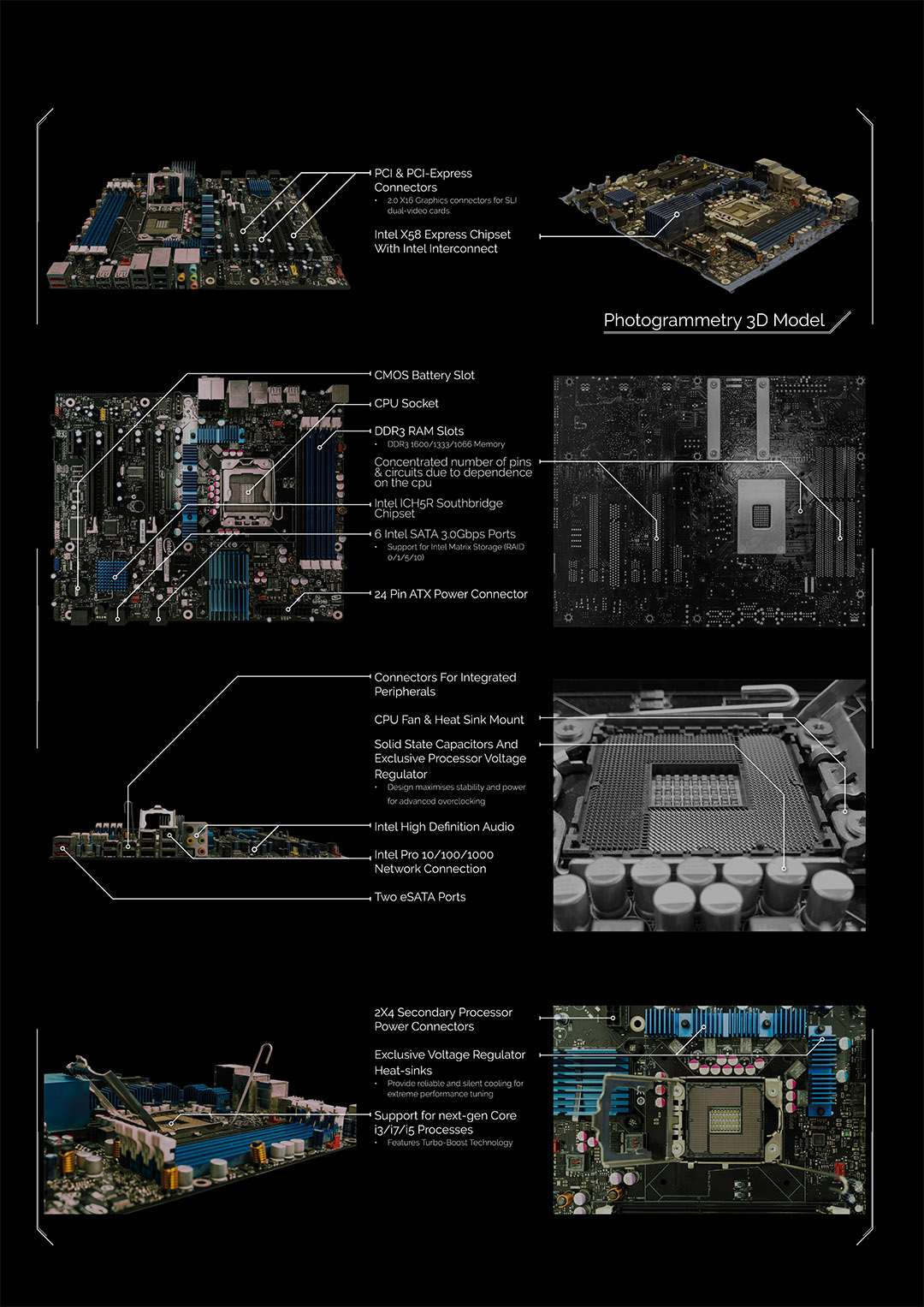 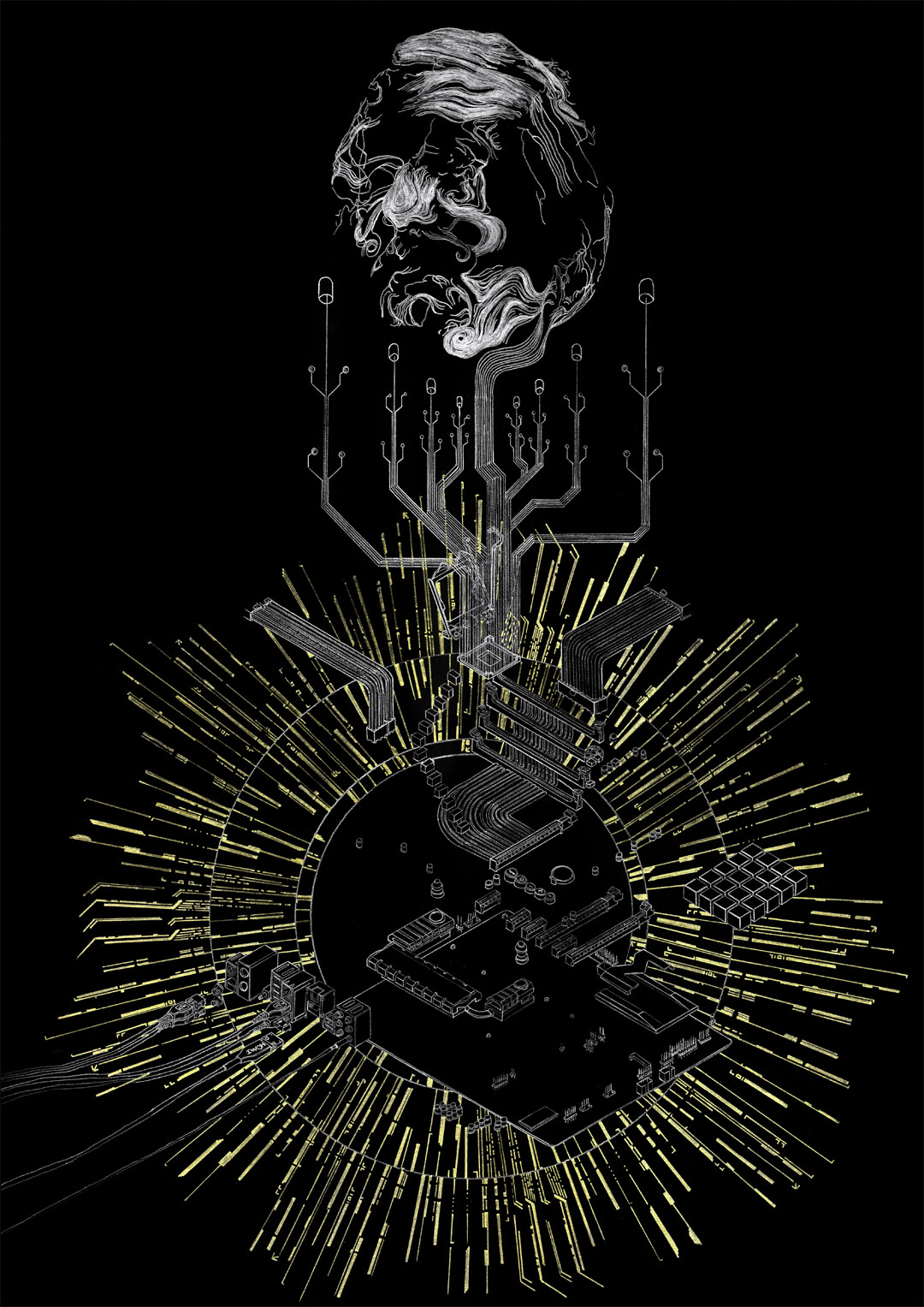 A printed circuit board containing the principal components of a computer or other device, with connectors for other circuit boards to be slotted into.

We began our investigation of our chosen object by producing a comprehensive documentation of the motherboard. Unlike many of the other available objects the motherboard presented a wide range of challenges, primarily the high degree of intricacy of the circuitry. However, another challenge emerged during our initial investigation, which was the lack of a perceptible ‘dynamism’. If the whisk’s dynamism was partly characterised by its kinetic energy in operation, the dynamism of the motherboard is slightly more subtle and cannot be immediately perceived.

The motherboard is an object which represents significant potential energy. Therefore, in order to express the embedded dynamism of the motherboard in terms of: the electric energy which circulates the object whilst in operation, its complexity and its ability to bridge the physical environment with the virtual environment, we produced a series of analogue, digital and 3 dimensional models which visually expressed these imperceptible characteristics.

In researching Boccioni’s “Development of a Bottle in Space” we also studied the works of Tullio Crali, an Italian artist who produced works in the style of Futurism such as, Assalto di motori (1968). In addition, we studied Robert Delaunay who’s works originated in Cubism but later evolved into Orphism, which was concerned with the expression and significance of sensation, as expressed through the pure lyrical abstraction using geometric shapes and vivid colour. Both of these artists works expressed technology, speed, movement, colour and geometry.

The drawing was intended to express the potential which the motherboard has, to link the psyche and the physical environment with the virtual environment. A boundary which is constantly being blurred with new technological developments, such as virtual reality and augmented reality, using equipment such as the Oculus Rift and Microsoft’s HoloLens. Furthermore, the subtle spiritual quality of the drawing was not unplanned — the use of gold for the radial pattern, reminiscent of a halo within religious iconography was selected to emphasise this characteristic. The work attempts to question whether technology has become a new form of spirituality, as globally, societies shift their foundations from religion to science and technology. 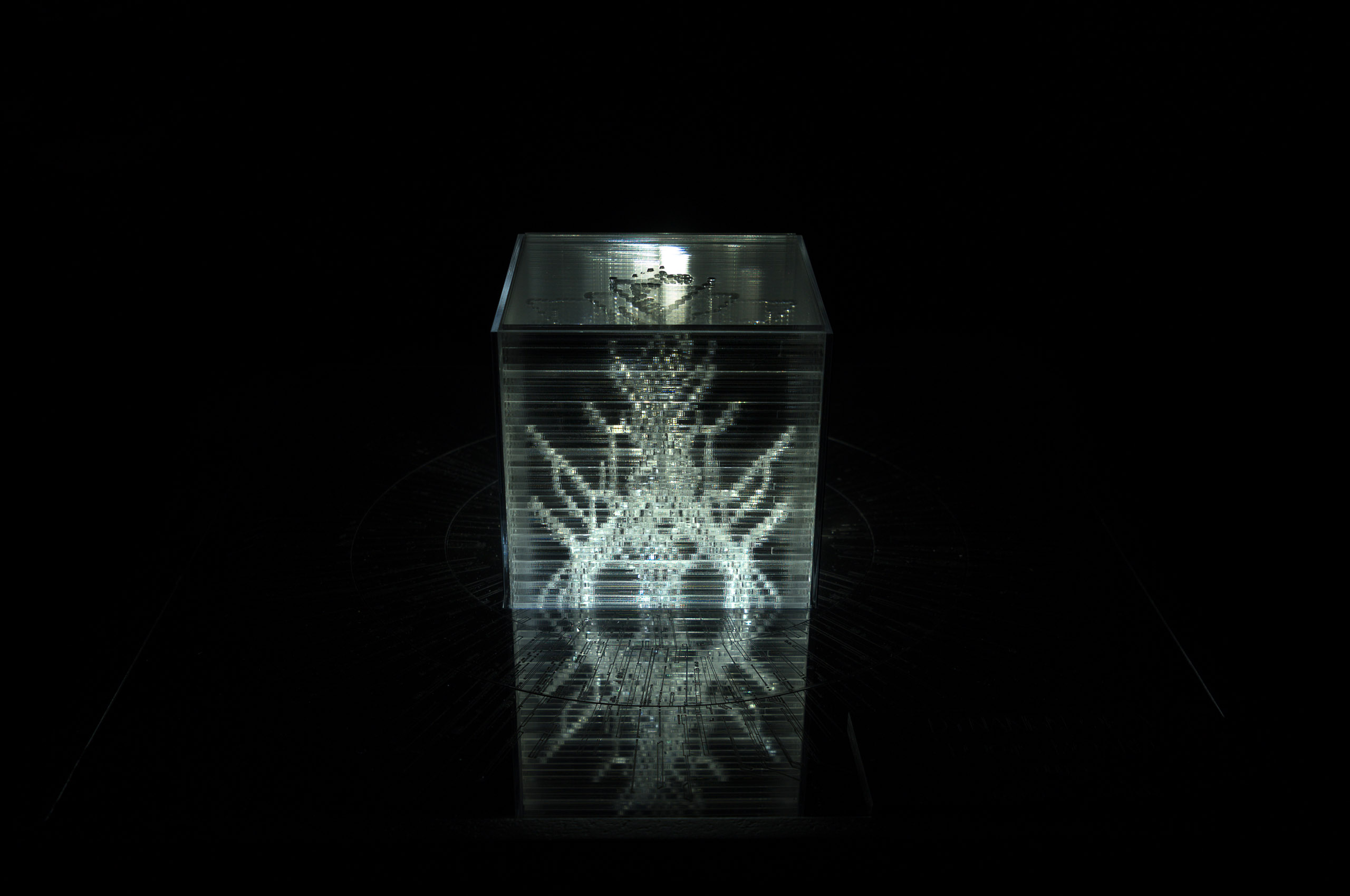 Due to difficulties we experienced trying to print models with completely hollow tubes, which would facilitate dye being passed through this network of tubes, we decided to reproduce the model using a laser cutter. The digital model was passed into a slicing software which generated the layers which would be cut on clear acrylic.

The final results were better than we predicted and the clear acrylic resulted in an exceptionally transparent object.

This result was a considered development emerging from our exploration of the visual theories of the Futurists and Orphic Cubists, who sought to express the true nature of the object through the inclusion of a sense of time and dynamism using multiple view points.

The Dynamism Of The Organism-in-its-environment

For task two our chosen organism was coral, we had gravitated towards corals out of interest in how the organism adapts to its surroundings by altering its local environment with the formation of calcium carbonate. Due to the colonial nature of corals this local change is perceptible at vast scales in the formations we refer to as coral reefs. We were also particularly interested in the wide variations of forms which corals produce and what environmental factors contribute to these forms.

We initially started by cataloguing the types of corals based on their taxonomy. The primary three orders of corals are: Hexacorallia, Octocorallia and Ceriantharia. Each order consists of a set of sub-classes.

To resolve this we decided to explore methods to generate digital coral-like objects which we could manufacture through 3D printing and CNC. The first prototype included writing a growth simulation algorithm which utilises a randomly generated point cloud of particles which represent nutrients. These particles move as if suspended in water. The algorithm generates a starting branch at a set coordinate, the initial branch splits in the direction of the nearest particle. Spiting is controlled by two parameters, a Nearest Distance and a Max Distance. By altering these parameters an operator can control the density of the final model. The branches are then divided into a point cloud and each point is given a weighting value based on its location within the array of branches. This weighting value is utilised in an iso-meshing process to determine the thickness of each branch. The iso-meshing process produces a 3D printable .obj file.

By employing this program we were able to generate many variations of coral-like structures, which we 3D printed, in order to have physical models to help inform our analysis of coral.